The benefits of steroids for dogs. 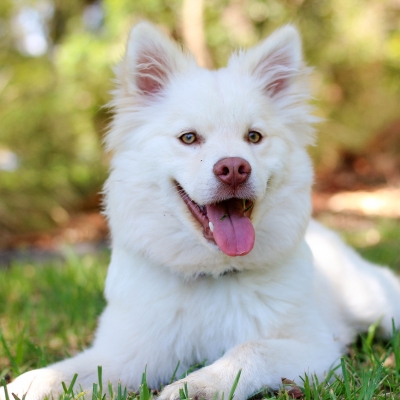 Matt brought Almond to my clinic because of some crusty skin on the bridge of her nose. She also seemed a bit quieter than usual. Almond is a five-year-old golden retriever, who loves to play ball. She usually has an energy level than I am envious of but today she seemed rather tired. Some crusty skin on the face might make a human a bit down, but Almond didn’t look in the mirror often. Skin problems are one of the most common reasons a dog goes to the veterinarian. Upon closer examination of Almond, she had a fever and the skin around her eyes was a bit crusty too.
A few quick skin tests later and we found that Almond had a skin condition called pemphigus foliaceus. A big word to describe her own body attacking a particular part of her skin.

Many dogs are successfully treated with steroids- not the type that bodybuilders can be accused of using, but the variety that helps with allergic reactions. There are many reasons this disorder can develop, chronic irritation, drug allergic reactions, even plants have been implicated. But the reality is, sometimes we don’t know why. After 2 weeks of treatment Almond is back to her beautiful self, and just a playful as always. But the story doesn’t end there, with this little issue I will get to see her a little more often than the average dog. She will have the potential to relapse and require treatment again, but most of her visits are just a happy tail wag and check up. I think she feels like it’s a play date and that’s good for both of us. Though I still can’t match her energy level, I can at least help her keep it up!