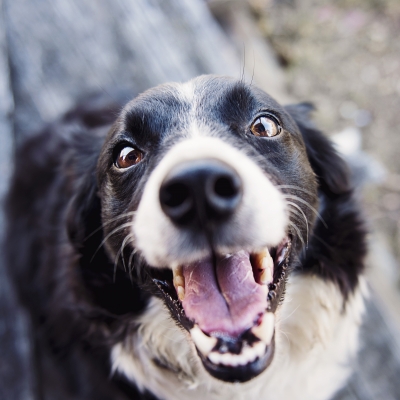 It was just another Wednesday when the door to my clinic first opened and a man and his son ran in carrying a black and white limp dog. The dog looks like it had sustained some trauma so we rushed him right into an exam room and began asking questions and giving her physical. It turns out that this dog just ran out in front of him on the road and though he tried to avoid it he actually ran the dog over. This man nor his son knew the dog. It was obvious in the eyes of his 10-year-old son that they wanted to do all they could to help the dog. My staff and I began stabilizing the patient and searching for information on who she might belong to. No collar no tags and no microchip. I took the mans name and number who dropped her off and I asked him to call me tomorrow so I could give him an update. I told him I’d be happy to talk to him tomorrow and I would ensure she did as well as possible.
A few x-rays, some time, and some injections later she was feeling better. No broken bones, no bleeding organs, she was lucky. One issue remained, with her head trauma she was unable to hear.
We called animal control and the Humane Society trying to find an owner. After of staying a week with us we lovingly named her Splat.
With the help of local rescue organizations, we found a great candidate for a forever home for her. It turns out they had a deaf daughter. The daughter had been researching the use of sign language in animals for several years and have been always hoping to find an animal in need. They drove nearly an hour just to meet Splat.
Seeing them using sign language to try and communicate with her as well as with each other was amazing. She did very well with them and was very affectionate and was also quite calm. I knew this was the home for her.
I do not know sign language so I asked the mother how the daughter felt about this sweet little dog. They signed back and forth for a moment and the mother told me she said ” there is no sweet little dog here, only my dog. We need to show her that life can go on without hearing and it can still be the amazing.”
Who can argue with that?